The Beginning of the Wood and Greenwaste Recycling Industry 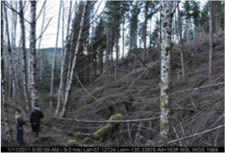 Prior to forming Earthsaver Equipment, Mr. Clinton managed a company contracting fire hazard reduction services to the U.S. Forest Service; specifically the treatment of logging or thinning slash. He soon became aware of the vast amount of waste wood, and the need for alternative uses.

In 1982, Mr. Clinton began experimenting with tub grinders manufactured by WHO, which were origianlly designed for agricultural purposes.  His goal was to develop a machine that would effectively process waste wood into a resalable product.  After several months and numerous design changes he developed the first tub grinder capable of processing waste wood material up to 6" diameter.

In the following months Mr. Clinton began promoting his concept at bio plants and municipal landfills in California. In December of 1982 the City of San Mateo, California purchased the first heavily modified agricultural grinder to process waste wood.

In April of 1983 Fuel Harvesters Equipment (FHE) was formed for the purpose of marketing the modified tub grinders.  While continuing to improve on the initial design, FHE contracted out manufacturing of the early tub grinders to WHO manufacturing.  That year FHE exhibited at it's first Waste Expo put on by the National Solid Waste Management Association; followed by the Bio Cycle conference the following year.  At that time, FHE was the only company at either of these shows to offer equipment for recycling wood or yardwaste material.  People in recycling questioned whether grinding waste wood was actually recycling, but of course this was 1983 and just the beginning of the yardwaste recycling industry.

Through 1989 FHE was the only company in the U.S. supplying "tub type" grinders built for wood waste processing.

Much of the early designs pioneered in these early tub grinders are still employed in machines today, such as:  fixed hammers, heavy duty screens and the heavy duty pin and plate hammermills, and magnetic head pulleys.

Manufactured Equipment
In 1986 FHE developed a new disc screen (similar to a star screen); in 1988 FHE added trommel screens to the equipment line; and in 1989 a contaminant separator.  Through continued R&D, FHE offered a heavy duty tub grinder capable of grinding woody material up to several feet in diameter by 1990. In 1992 FHE designed and began production of a full line of pull type and self-propelled compost turners.

By 1994 the Earthsaver tradename and trademark was introduced to better reflect the “green” nature of the equipment.  FHE continued to manufacture and sell equipment and parts under the Earthsaver brand through 2001.

Earthsaver Today
In 2001, Earthsaver reinvented itself as a used equipment dealer to offer parts and services to equipment owners, as well as an affordable and very effective option for marketing and selling their used wood and greenwaste recycling equipment.  Over the last decade we have gained significant experience with all makes and models of tub grinders, horizontal grinders, trommel screens, compost turners, as well as other various support equipment.

By 2010 we began regularly refurbishing used grinders and screens of all makes and models as well as parting out machines beyond repair. Our goal was and continues to be to offer affordable serviced machines and parts nationwide. Our parts ecommerce site went live in 2020, offering a quick and easy way to order your most common wear items.

In 2022 we established a new 2 acre facility in Cleveland, GA dedicated to machine refurbishment and parts warehousing.